Get to know us

Niall Lucey, Solicitor, graduated from the University of Limerick in 1996 with a Bachelor of Arts Degree in Law and European Studies, which included an Erasmus Term at the University of Nantes, France.
He subsequently attended the UCD Michael Smurfit School of Business where he obtained a Graduate Diploma in Business Studies. He qualified as a Solicitor in the year 2000 and was admitted on the Law Society’s Roll of Solicitors in Hillary Term of 2001.

He works primarily in the areas of residential and commercial conveyancing, commercial law and restructuring, probate, licensing law and planning. His advises private individual clients, landlords, tenants, business owners, farmers, licensed vintners, hoteliers, private companies, liquidators and banks in relation to security related matters. He spent two years working with P.J. O’Driscoll & Sons Solicitors in Cork City in the areas commercial, conveyancing and litigation, having previously worked for our firm in Tralee after qualifying.
He returned to join the firm as a Partner in July 2003. He has since obtained a Diploma in eCommerce Law and received a Certificate in Banking Law from the Law Society of Ireland. He is a committee member of the Kerry Law Society.

His sporting interests include running and swimming and he participates in local Triathlons. He is a member of the GAA and was involved in his local Ballyheigue GAA Club where he was an underage coach in hurling and football and was previously the Club’s Childrens’ Officer. He is currently coaching the Austin Stacks under 12 girls football team in Tralee. He is also a member of Ballyheigue Players Drama Group, who in recent years have put on productions of John B. Keane’s ‘Sive’ and ‘The Field’. 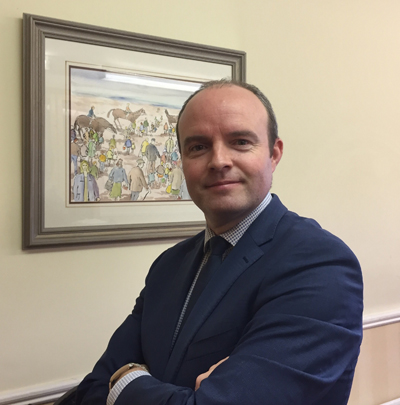